Aaron Paul married his long-time girlfriend, Lauren Parsekian, in Malibu this weekend. The couple has been engaged since 2012. 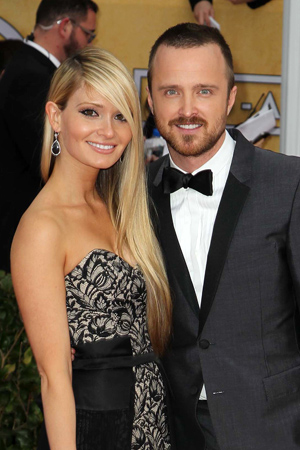 OK, anyone who has ever watched Breaking Bad has a little crush on Aaron Paul: fact. This leads us to this painful (yet joyous!) announcement…

The 33-year-old actor is now permanently off the market. Paul has married his girlfriend, Lauren Parsekian, at Calimigo’s Ranch in Malibu.

The couple reportedly met at the Coachella Music Festival and got engaged on New Year’s in 2012 while in Paris. The newly branded hubby posted an adorable photo of the couple, with a sweet caption: “A day will never go by without me reminding you how special you are. Thanks for last night my pretty little bird.”

Mrs. Paul reposted the same photo with the caption, “Well that was the most magical night of my life. #mrmrspaul.”

We suppose with the intense amount of cuteness between these two, we can waive our jealousy. Congrats to the newlyweds! We’re looking forward to the wedding photos!

Jennifer Aniston had “so much fun” playing a stripper
Star Wars VII: Jonathan Rhys Meyers first new name on the list
Will Smith wants in on The Wild Bunch remake