We’re sure she’s not the only one loving her new role. Jennifer Aniston spills the beans on her workout routine and her stripping character in We’re the Millers. 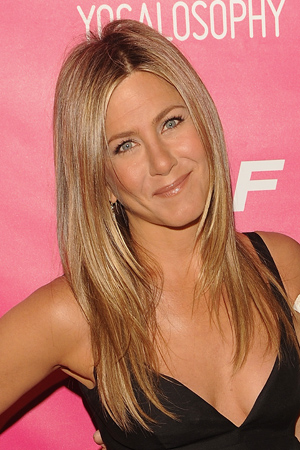 If you haven’t heard all the hubbub, Jennifer Aniston plays a stripper in her new movie, We’re the Millers.

Long-standing fans of the actress are currently in training to ensure maximum speed at pre-ordering tickets for this comedy. But if you lie on the pervy side of things and are more interested in some good old-fashioned nudity, prepare to be disappointed.

It turns out that while the gorgeous Aniston wears many a lingerie piece, she will not be in the nude at all. Sorry, folks!

Jennifer Aniston made a director cry >>

The 44-year-old beauty did admit that she had to amp up her workout routine for the role, and she did it with the help of her yoga teacher, Mandy Ingber, who “doubled the amount” of exercise Aniston usually does.

“You get up into my age, and you’ve gotta do a little bit more,” the actress told Access Hollywood‘s Shaun Robinson.

As long as it was all worth it! Jennifer confessed that it was actually incredibly fun to play a stripper in the film, and she really enjoyed it.

“You might see more than you want to see,” she said. “[Stripping] was so much fun. I had a great choreographer. She was fantastic, and it was to great music, and it was fun.”

There are not many 44-year-olds running around looking as amazing as Aniston does, so hats off to you, Jen! Colour us jealous.

We’re the Millers stars Jason Sudeikis as a drug dealer, who arranges for a fake family (Aniston plays his fake wife) as part of a plot to smuggle a shipment of weed into the States. The film comes out on Aug. 9.