Justin Bieber was met with less than an approving reaction at the Billboard Awards, when the pop star was booed while receiving his second award of the night. 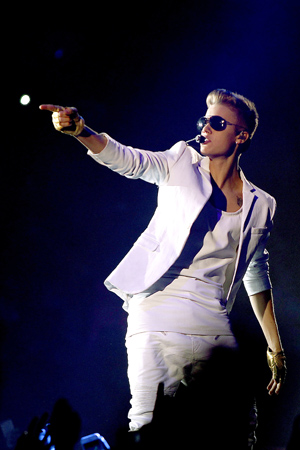 It seems not everyone is a Belieber — or maybe they just don’t have any manners.

Justin Bieber was booed quite fervently at the 2013 Billboard Music Awards while accepting his second award of the night.

The 19-year-old singer performed twice during the show and picked up the Top Male Artist award with cheers from the crowd. So far, so good.

But then something went awry toward the end of the night, when Bieber was summoned to the stage to accept the Milestone Award. Through the screams of the fans, you could definitely make out a collective booing, which left the young singer dumbfounded for about 30 seconds. He then collected his thoughts and gave his speech:

“I’m 19 years old. I think I’m doing a pretty good job, and basically, from my heart, I really wanna say it should really be about the music. It should be about the craft, the craft that I’m making.”

Justin Bieber as a sex toy? >>

Staying cool even whilst being booed — atta boy! Whether the unfavourable reaction was indeed due to his recent antics (like attacking paparazzi or smoking marijuana) or because he beat out Taylor Swift for the award and her fans were not happy will remain a mystery.

Why do you think he was booed?