Even Wayne Brady can get serious, despite being a comedian. The actor spoke out against Bill Maher’s continual use of Brady as a punchline in Obama jokes. 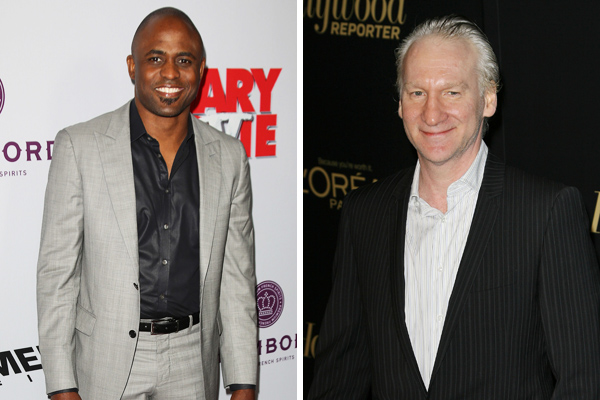 Wayne Brady himself is a comedian, so he knows a good joke when he hears one. But the actor is not a big fan of Bill Maher using him “as a cultural linchpin of his not-black-enough argument” when poking fun at Barack Obama. Yikes!

Case in point: During a 2010 CNN interview, Maher stated, “I thought when we elected the first black president, as a comedian, I thought that two years in that I’d be making jokes what a ‘gangsta’ he was. You know. And not that he’s President Wayne Brady, you know. I thought we were getting Suge Knight.”

The HBO Real Time host has been comparing Obama to Brady for years!

Well, Brady finally decided to talk about it at length and addressed the “beef” between the two in an interview with the Huffington Post.

“Bill Maher has never walked in my shoes or any black man’s shoes,” he stated. “The fact of the matter is… the black man in his mind is stereotypical ‘What?’ ‘You know, that dude.’ That guy exists, but that’s not the range of the black experience.”

The comedian continued: “So then, when I meet you, when I talk to you again, I’ll give you that black dude, and I will beat your a** in public. And that’s what I said.”

Brady also pointed out that not everyone absorbs Maher’s jokes lightheartedly, and the misrepresentation of the culture concerns him.

“When Bill Maher says something like that, he has a segment of America’s ear,” the Whose Line alum said. “So when he says that, that’s OK for somebody at home to go, ‘That’s right. Guys that actually talk well and are black, that’s not black. I like my blacks misunderstandables.’ Yeah, so, that hurts me. Not hurts me me — that hurts me for our culture, because the fact of the matter is I love our culture.”

Well, there you go. Maher has not addressed the comment yet, but we’re sure he will on the new episode of Real Time this Friday. How about we just say that using people as punchlines in jokes is not a classy thing to do, yes? Good. What do you think?