To mark a transition in her life and the release of her latest album, Demi Lovato got a brand new tattoo from a celeb-approved New York tattoo artist. 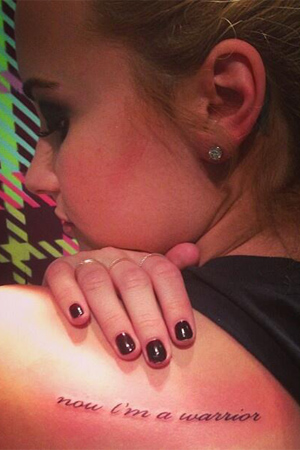 You smell that? That’s the scent of fresh ink.

Demi Lovato celebrated the release of her new album with a personal gift. The songstress debuted a new script tattoo via Twitter, reading, “now I’m a warrior.”

“Thanks @BangBang! Album release day!!! #DEMI,” the X Factor judge tweeted along with the photo.

Bang Bang, or Keith McCurdy, is the New York-based tattoo artist behind this ink design and is a favourite with many stamped celebrities, like Rihanna and Justin Bieber.

This is not a first tattoo for Lovato, of course. The 20-year-old has the words “stay” and “strong” tattooed on her wrists, “Let Go” and “Let God” on her feet and birds on her forearm.

Demi: “Being a celebrity is dangerous” >>

Lovato’s new album, Demi, was released on May 14 and is climbing up the charts with favourable reviews, so check it out. What do you think of the new ink?