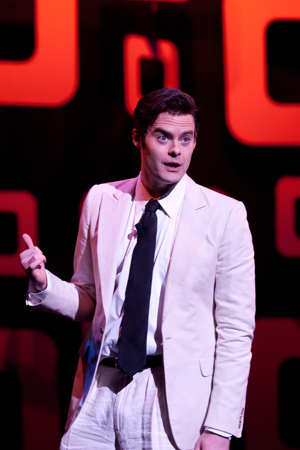 We feel this has been done deliberately to upset us!

After being a regular for eight years, the hilarious Bill Hader is leaving NBC’s Saturday Night Live!

“It was a hard decision, but it has to happen at some point,” the comedian told the New York Times. “It got to a point where I said, ‘Maybe it’s just time to go.'”

The news is a little hard hitting considering that fellow SNL-er Seth Meyers recently announced his departure from the sketch comedy show to replace Jimmy Fallon on Late Night in 2014. Both Meyers and Hader lead the Weekend Update sketch on the show, so we’re hoping for an amazing finale to their run on Saturday Night.

In memoriam of some of SNL’s dearly departed characters >>

But to add to the trauma (let’s get it all out at once), Jason Sudeikis and Fred Armisen are also reportedly considering leaving the show, but neither has confirmed their departure. The upside of this situation is the opportunities for up-and-comers to bring something new and fresh to this great show.

Tell us, which comedian or actor would you like to see as a regular on SNL?