In a recent interview, Zoe Saldana reveals that she’s open to raising children with another woman and admits she’s over dating actors. 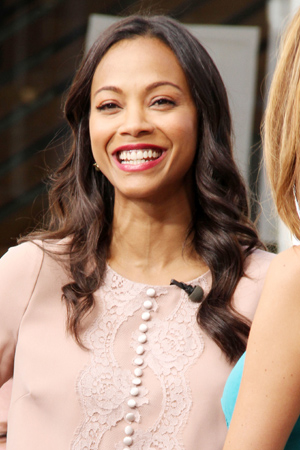 This gal knows what she wants and isn’t afraid to say it.

In the newest issue of Allure magazine, the gorgeous Zoe Saldana states that when it comes to dating fellow actors (like ex, Bradley Cooper!), she’s “been there, done that, got the T-shirt.”

So what’s next for the actress, then?

Saldana told the mag she might “end up with a woman raising my children… That’s how androgynous I am!”

Of course, this raises the obvious follow-up question of whether she’s ever dated a woman, to which the actress coyly responded with, “Just put three dots as my response. That’s it.”

And thus, everyone’s jaws dropped. What an allusive woman! Saldana did offer a glimmer of an explanation for her thinking process, and we certainly agree with it.

“If I have something good in front of me — it doesn’t matter if it’s a person or a pair of shoes — I’m not going to test something else,” she stated. “It’s insecure, and it’s immature.”

Bam! There you have it. Just when you think you’ve figured her out, Miss Saldana surprises you all over again. For the full interview, look for the June issue of Allure, starting May 21.