The rumours have been circulating for a while, but it has been confirmed! Seth Meyers will replace Jimmy Fallon on Late Night. 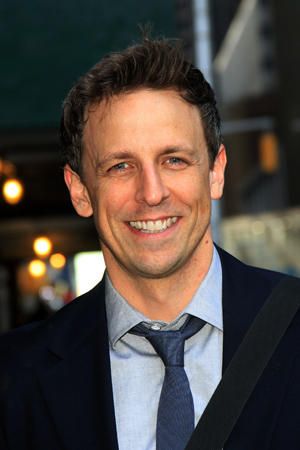 No longer will you have to wait for Seth Meyers’ humour for an entire week; you will get to bask in it every weeknight!

The Saturday Night Live comedian will be replacing Jimmy Fallon on Late Night, while the latter is claiming Jay Leno‘s throne on The Tonight Show in 2014.

“We think Seth is one of the brightest, most insightful comedy writers and performers of his generation,” stated Bob Greenblatt, NBC chairman. “His years at SNL‘s ‘Weekend Update’ desk, not to mention being head writer of the show for many seasons, helped him hone a topical brand of comedy that is perfect for the Late Night franchise. On behalf of Steve Burke, Ted Harbert and Paul Telegdy, we couldn’t be happier that Seth and Jimmy Fallon will be continuing their careers at NBC after growing up in this network’s late night legacy.”

Meyers has been part of the Saturday Night cast for 12 seasons and has been the show’s head writer for eight of those seasons. It’s difficult to imagine the show without him…

“I only have to work for Lorne [Michaels] for five more years before I pay him back for the time I totalled his car,” said Meyers in a statement. “12:30 on NBC has long been incredible real estate. I hope I can do it justice.”

We’re sure he will! What do you think of Meyers as a Jimmy Fallon replacement?