Splendid news! The hilarious NBC comedy Parks and Recreation, starring Amy Poehler, has been renewed by the network for another season. 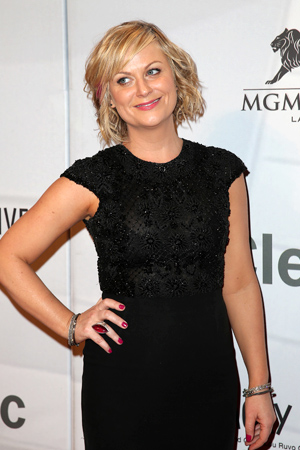 Great news for Pawnee and the rest of the world! NBC comedy Parks and Recreation has been renewed for a sixth season! Praise Zorp, the Surveyor!

The news shouldn’t come as a huge surprise, although the Amy Poehler-led comedy has been struggling with ratings since the first season (in comparison to other big-name shows, that is). With The Office and 30 Rock out of the race, Parks and Recreation is NBC’s front-runner now. Not to mention the mountain of cliffhangers in the fifth season finale, but we won’t spoil it for you…

If you’re unfamiliar with the show, it kicked off in 2009, set in the fictional town of Pawnee, Indiana. The story revolves around Leslie Knope, the deputy director of the Parks and Recreation Department, and her co-workers in Pawnee City Hall. If you haven’t seen the show yet, give it a go. You’ll love it!

Amy Poehler and Will Arnett split up! >>

Now that the sixth season has been confirmed, we can relax. NBC will be unveiling the remainder of its fall lineup on Sunday. Will you be tuning in for season six of Parks and Recreation?

Neil Patrick Harris will host the Tonys for the fourth time
Once Upon a Time‘s Lana Parrilla is engaged!
Jon Hamm is offered lifetime supply of underwear