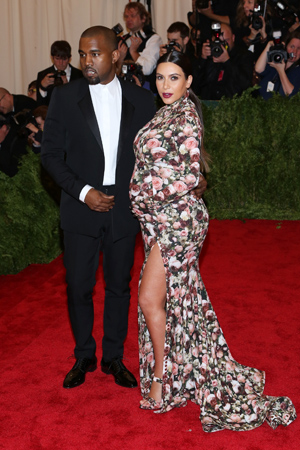 West is not the only man who’s amazed by Kim Kardashian.

In an interview with WWD, Givenchy designer Riccardo Tisci expressed his adoration for the star and spoke about the sentiment behind her look at the Met Gala (which he created for her).

“She is a really good friend, and I am very happy she came to the Met for the first time,” he stated. “I think she looked amazing. She was the most beautiful pregnant woman I dressed in my career.”

But it wasn’t just a secret love for botany that inspired Kardashian’s dress; it was also her growing family.

“She is the future wife of a really good friend of mine. I wanted to have a moment of family… Kim, Kanye and the baby,” Tisci said. “To me pregnancy is the most beautiful thing in the world, and when you celebrate something, you give people flowers.”

Hence the all-floral dress — ta-dah! It makes a lot more sense now. It’s probably quite flattering to know that one of the best fashion designers in the world thinks you’re the most beautiful pregnant woman, eh?

What do you think of Kim’s Met Gala look?