What is more romantic than getting engaged in a foreign land? Actress Lana Parrilla got engaged to beau Fred Di Blasio while on a trip to Israel. 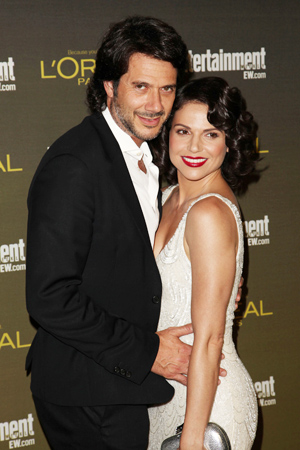 The Evil Queen Regina — erm — we mean, Lana Parrilla, is destined for a fairy-tale wedding, having gotten engaged to her boyfriend, Fred Di Blasio.

The Once Upon a Time actress accepted Di Blasio’s proposal in Israel’s Negev Desert on April 28, while on a trip with the cast of ABC’s Scandal as part of the America’s Voices in Israel initiative.

Per The Times of Israel, Parrilla felt “so celebrated” by those who heard of her engagement and is even playing with the idea of visiting the country every year to commemorate the occasion.

Parrilla thanked the well-wishers via Twitter, saying, “Words can’t describe our gratitude @ the wonderful outpouring of goodwill in regards to our engagement! Thank u! We luv you!”

Congrats to the newly engaged couple! We are excited for the wedding!