Is there anyone more drool-worthy than Channing Tatum? The small-town boy from Cullman, Alabama, has been dazzling us on the silver screen since 2004. Can’t get enough of the multi-award-winning and sizzling-hot actor? Then check out these movies. 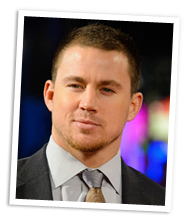 Is there anyone more drool-worthy than Channing Tatum? The small-town boy from Cullman, Alabama, has been dazzling us on the silver screen since 2004. Can’t get enough of the multi-award-winning and sizzling-hot actor? Then check out these movies.

Lots of explosions, lots of action and, most important, lots of Channing Tatum. In White House Down, he takes on the role of John Cale, a Capitol policeman who misses out on his dream job with the Secret Service, protecting the president. Knowing his daughter, Emily, will be disappointed he didn’t get the job, he takes her on a tour of the White House. When the building is overtaken by a paramilitary group and she is taken hostage, it’s up to Cale to save his little girl and the president. Release date is June 28, 2013.

Some things you never see coming. The president has ordered the world’s elite training force — the G.I. Joe team — to be terminated for treason, and those who survive face off against Zartan and the world leaders he has influenced. Spoiler alert: Channing dies after the first 20 minutes, but it’s 20 minutes worth watching. Pwaaroof! What was the scriptwriter thinking?

“The law says you cannot touch, but I think I see a lotta lawbreakers up in this house tonight.” Great buns, pecs, chiselled bodies and six-packs — shame about the script and the lack of stripping. If you’re looking for a movie with a storyline, this isn’t it. The only decent thing about this movie is the eye candy — and Channing, of course.

Your heart will flip-flop and take the tissues. Newlyweds Paige (Rachel McAdams) and Leo (Channing “Cutie-pie” Tatum) are in a perfect little bubble of love until a car accident shatters life as they know it. Paige sustains serious head injuries and, when she wakes, has no memory of her life with Leo. Leo does his best to win back her heart. Based on the true story of Kim and Krickitt Carpenter.

Who got fat? Who got rich? Who got hot? Who didn’t change? It’s the night before the class reunion, and a group of friends realize they haven’t quite grown up. Channing plays Jake and stars alongside his wife, Jenna Dewan-Tatum.

Rookie cop Jonathan “Milk” White (Channing Tatum) is working in the neighbourhood where he grew up when old secrets start to rear their ugly heads, threatening his career and family. If you enjoyed The Taking of Pelham 123, Takers or Spy Game, you will probably enjoy this movie.

Special Forces Army Sergeant John Tyree (Channing Tatum) is on two weeks’ leave when he meets Savannah Curtis (Amanda Seyfried). It’s love at first sight. Though the two are separated by distance, their love story continues through a series of letters until he returns.

In Public Enemies, Channing goes gangster in his role as Pretty Boy Floyd. It is set during the 1930s crime wave, and the Feds are on a mission to take down a bunch of American gangsters. Channing stars alongside lots of eye candy, like Johnny Depp, Christian Bale and Stephen Dorff. Take a bucket for your dribble.

When the girls’ soccer team is cut and the coach refuses to let her play for the boys’ team, Viola (Amanda Bynes) poses as her twin brother while he’s in London for two weeks and joins the soccer team at his elite boarding school. When she ends up falling for her brother’s roommate, Duke (Channing Tatum), there’s just one small problem: Duke thinks Viola is a dude.

Taking on the job of basketball coach for his old high school, former champion athlete Ken Carter is disappointed in the attitude of the basketball team and its poor performance on the court and in the classroom. In an attempt to change this, he draws up contracts with each player, and when they break the contracts, he benches the entire team. Channing plays Jason Lyle, a member of the basketball team. Never having played basketball, Channing had individual training to get him up to speed.

It’s like Dirty Dancing on steroids. Channing Tatum plays Tyler Gage, a kid from the wrong side of town. He’s caught vandalizing the performing arts school, which results in his getting a chance to win a scholarship and dance with professional dancer Nora, played by Channing’s now wife, Jenna Dewan. Channing also has a role in the sequel, Step Up 2: The Streets.

This movie just goes to show why Channing is still the sexiest man alive. Smouldering onscreen, he will set hearts racing in this provocative thriller. When Martin (Channing’s character) meets Emily, he sweeps her off her feet. Their happiness is short lived, and Emily ends up being prescribed a drug that throws her entire world into chaos.

Popular jock Jenko (Channing Tatum) and his dorky friend Schmidt (Jonah Hill) join the police force and end up as partners. The pair goes undercover to bust a drug ring supplying high-schoolers with synthetic substances. Surprisingly funny, Channing will have you rolling in the aisle with his comedic timing.

What would you do if you caught your best friend’s wife cheating? This is the dilemma Ronny Valentine (Vince Vaughn) has. In this predictable comedy, Channing is the shining light as a lovable meathead called Zip. Just looking at his tattooed, muscly arms makes the lame attempts at one-liners worth it.

Decorated Iraq war hero Brandon King returns home only to find out he’s being shipped out on another tour. This movie has everything: action, scenes where you’ll need to get the tissues and lots of eye candy, with a shirtless Channing, Ryan Phillippe and Joseph Gordon-Levitt.

What’s your favourite Channing Tatum movie? Tell us in the comments section below.