Nobody wants to be in that situation! Ellen DeGeneres has thanked the firefighters who battled a blaze near one of her homes in California. 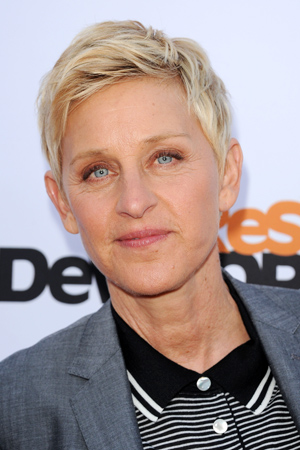 You could say this is one advantage to having multiple homes…

Ellen DeGeneres got quite a scare when her farmhouse was caught amidst a fire in Camarillo, California. The blaze damaged several properties (no one was hurt!), and the 55-year-old host expressed her gratitude to the firefighters involved during the Tuesday taping of The Ellen DeGeneres Show.

“It was really scary. I don’t know if you were watching the news over the weekend here in Los Angeles in the California area…There were just fires everywhere,” DeGeneres stated in the opening monologue. “This was our farm. I wasn’t there.”

Ellen honoured with a Hollywood star >>

“We had someone there taking care of it… We had to evacuate the horses and scary as can be. That’s one of the cabins. It’s, like, right behind. Just unbelievable. The air quality is still really, really bad out there. But everything was charred. People lost a lot of land. No houses were lost,” the star continued while showing photos of her property.

“The firefighters are amazing,” DeGeneres said. “You women and men who do this are amazing. So we were up against a mountain, and I was watching our house on the news. The helicopter was above our house. It’s just surreal to be watching — that’s our house.

“The firefighters were based in several homes in our area, and our farm was one of them. They were on our property, and we had 16 firefighters that spent the night there. Sylvia is our housekeeper. She got a picture with the guys that were there. Amazing.”

Don’t worry. Ellen didn’t just lend beds to these brave men and women; she took proper care of them.

“They had dinner there. They had breakfast there. They showered there. We were so glad that we could help them. They worked so, so hard. So thank you to all the firefighters everywhere.”

We’re sure the firefighters were grateful for Ellen’s generosity as well. We’re proud of DeGeneres for publicly praising firefighters — we often forget about the risks they take every day.