Lil Wayne has made great strides. The rapper has sent an apology letter to the family of Emmett Till for the offensive lyric he contributed to a rap song. 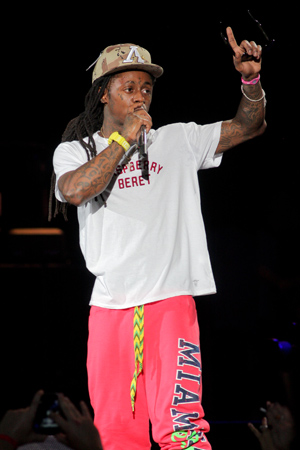 It takes courage to admit to a mistake, so we respect him more for it.

Lil Wayne has finally sent an official apology to the family of Emmett Till for a lyric he wrote for Future’s “Karate Chop” remix, which was leaked online in February.

Emmett Till was an African-American Chicago teenager who was beaten, mutilated and murdered in Mississippi in 1955. The case garnered massive national outrage and was pivotal to the progress of the civil rights movement. Lil Wayne’s insensitive lyric read, “Beat that p**sy up like Emmett Till.”

You can clearly see where the problem arose. Epic Records apologized for the song leak immediately, with Till’s cousin Airickca Gordon-Taylor stating the comparison of Emmett’s murder to “the anatomy of a woman was really very disrespectful.”

The rapper penned an apology letter (albeit after a pause) to the Till family, which they shared with the media on Wednesday.

“It has come to my attention that lyrics from my contribution to a fellow artist’s song has deeply offended your family,” Wayne stated. “As a father myself, I cannot imagine the pain that your family has had to endure. I would like to take a moment to acknowledge your hurt, as well as the letter you sent to me via your attorneys.

“Moving forward, I will not use or reference Emmett Till or the Till family in my music, especially in an inappropriate manner,” the rapper continued. “I fully support Epic Record’s decision to take down the unauthorized version of the song and to not include the reference in the version that went to retail. I will not be performing the lyrics that contain that reference live and have removed them from my catalogue.

“I have tremendous respect for those who paved the way for the liberty and opportunities that African-Americans currently enjoy. As a business owner who employs several African-American employees and gives philanthropically to organizations that help youth to pursue their dreams my ultimate intention is to uplift rather than degrade our community.”

There you have it. Regardless of why he wrote the lyric in the first place, we appreciate Lil Wayne owning up to it and apologizing to Till’s family. What do you make of this?