At one of Beyonce’s six concerts in London, the singer called out on a particular royal to help her with the lyrics of a song, not realizing who she was. 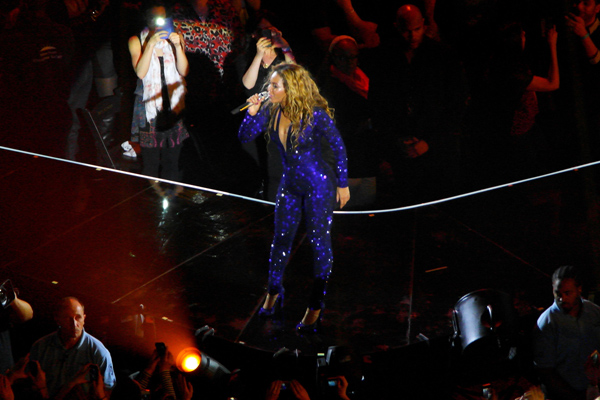 Beyoncé had a bit of an awkward moment with a particular concertgoer at one of her six London Mrs. Carter World Tour performances at the O2 Arena.

Per tradition, during the rendition of “Irreplaceable,” Beyoncé has random audience members belt out “to the left, to the left,” but things went a little awry when she pointed the microphone at a real-life royal.

Princess Eugenie, sixth in line to the throne, happened to be on the singing end of the mic and, from either nervousness or not knowing the words, fell completely silent. Beyoncé picked up the words herself and finished the refrain.

A witness at the concert retold the story to The Mirror: “It was hilarious — Eugenie was on the front row with Kate Middleton’s brother, James, and his new girlfriend, Donna Air, plus designers Matthew Williamson and Patrick Cox.

“She was really excitable and filming the whole thing on her iPhone, like any other fan. Beyoncé clearly didn’t recognize her, so when it came to ‘Irreplaceable’ and the part where she picks on an audience member to join in with her, she simply chose the first woman she could reach.

“When Eugenie, who had gone bright red, ducked down, Beyoncé was forced to quickly fill in the missing words and find a new, willing victim. All Eugenie’s friends were teasing her about her stage fright for hours afterwards.”

Beyoncé’s and Princess Eugenie’s camps have not addressed the incident yet. Hey, it could have happened to anyone. Beyoncé is American; she probably doesn’t keep a scrapbook of all the British royals. We hope Princess Eugenie recovers from the bit of embarrassment.

Check out the “Irreplaceable” performance at the O2 Arena below, though it’s not the one with the princess (still amazing, nonetheless!). What do you make of this?