Gwyneth Paltrow addressed her new name of World’s Most Beautiful Woman, stating she’s quite flattered and a little embarrassed by the title. 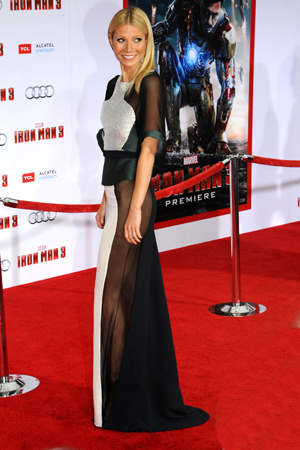 While it’s very easy to get distracted by the revealing, risqué dress Gwyneth Paltrow wore to the Iron Man 3 premiere in Hollywood, try to stay with us!

The 40-year-old actress had a chance to reflect on her newly acquired title of People magazine’s World’s Most Beautiful Woman. She’s obviously flattered — and a little embarrassed?

“It’s very sweet, and I’m so embarrassed, but I’m so happy,” the gorgeous mum of two told E! News.

Gwyneth Paltrow is the World’s Most Beautiful Woman >>

“It’s funny, these things, because it’s, like, obviously not true. But it’s very sweet to be named that,” Paltrow told Associated Press. “Because I mean, you can’t say that, you know! But it’s been wonderful. It’s been very wonderful. And as my friend said, it’s so nice that someone who has kids and is a mom and is not, like, 21 is named that. It’s really an honour.”

“I’m just very happy for her,” stated Iron Man himself, Robert Downey Jr. “It’s fleeting, and you want to take all that glam stuff while you can.”

We couldn’t agree more! Just look at her, for Pete’s sake! The woman is 40 years old, with two kids, and is rocking a dress most 20-somethings wouldn’t be able to pull off. Bravo!

If you want to catch Paltrow as Pepper Potts in Iron Man 3, it’s slated for release May 3. Check out the Iron Man 3 trailer below if you haven’t seen it yet. Will you be catching this flick in theatres?