Gwyneth Paltrow is one of the few people you just cannot help but love. The stunning actress was named World’s Most Beautiful Woman by People magazine this year. 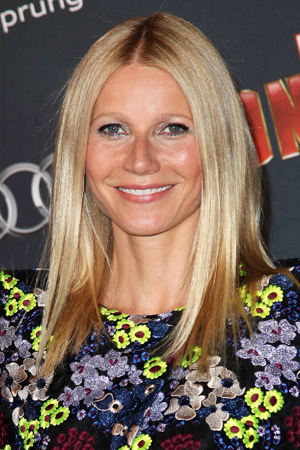 People magazine has proclaimed Gwyneth Paltrow the World’s Most Beautiful Woman, and we are not surprised.

So let’s see… Now this gorgeous 40-year-old is not only an Oscar-winning actress, phenomenal singer, author and Goop wizard but also the fairest of them all. We are simultaneously incredibly jealous and impressed.

Was Gwyneth Paltrow being racist? >>

But believe it or not, Paltrow is not always all glammed up and carpet-ready. The actress claims her hubby, Chris Martin, pokes fun at her dressy look.

“He’ll make a joke about it,” Paltrow told the mag. “If I’ve gotten fully dressed up, he’ll be like, ‘Oh, wow! You’re Gwyneth Paltrow!’ Because he’s used to seeing me in, like, baggy shorts and frizzy hair.”

The star also keeps it simple around the house when taking care of her and Martin’s two children, 8-year-old Apple and 7-year-old Moses.

“Around the house, I’m in jeans and a T-shirt. I don’t really wear makeup,” she stated. “That’s what they’re used to.”

We love, love, love Gwynnie! In our heads, all celebrities look like a million bucks even when they’re washing the dishes. But Paltrow has always maintained a wonderful image of normalcy that we can all relate to. We suppose that’s why she is the World’s Most Beautiful Woman.

Tell us, which stars do you relate to the most, and why? Sound off in the comments below.

Psy sets a new record
Backstreet Boys get a Hollywood star!
The Rock scheduled to have abdominal surgery

18 mins ago
by Grace Kang

38 mins ago
by Grace Kang