The Backstreet Boys have been honoured with a star on the iconic Hollywood Walk of Fame. The now grown-up boy banders got a little emotional during their speech. 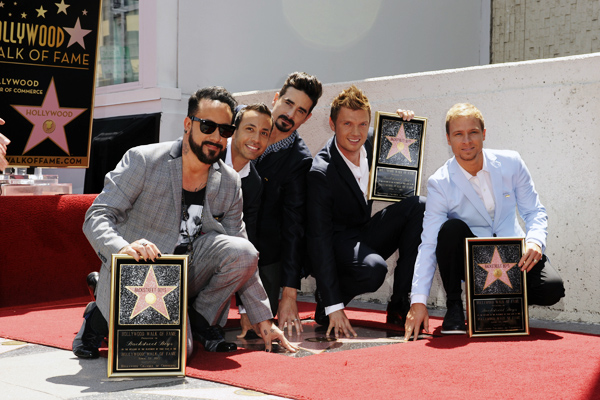 Our inner teenage selves are screaming and clapping frantically.

The Backstreet Boys have been officially eternalized with a star on the Hollywood Walk of Fame, right between Boyz II Men and The Osmonds (no joke!). Great neighbourhood and excellent neighbours, we say!

After selling over 130 million albums worldwide, it’s about time. The Backstreet Boys have definitely earned it.

More on the Backstreet Boys documentary in the making >>

“I love you guys. And aside from my wedding day and the birth of my daughter, this is hands down the best day of my life,” an emotional A.J. McLean stated.

Nick Carter chimed in, “I never ever imagined in a million years that we would be a part of this.”

“I worked my entire life to never be walked on, but I’m OK with this one,” quipped Brian Littrell.

Cutie-patootie Kevin Richardson concluded with, “What a beautiful day. What another beautiful way to celebrate 20 years together.”

Has it been 20 years already? We feel a little old. Congrats, fellas! Opinions? Sound off!