This is kind of graphic. Dwayne Johnson is due for surgery next week, following an injury. The actor sent out a descriptive tweet to his fans. 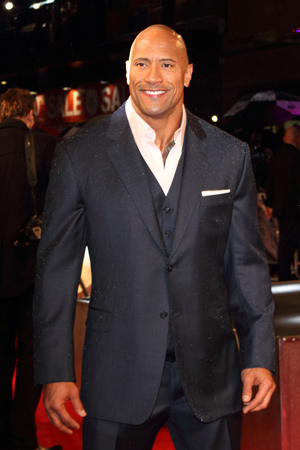 Somebody has been a bit too fast and furious, it appears.

Dwayne “The Rock” Johnson is scheduled to undergo abdominal surgery, following an injury. The actor gifted his followers with a vivid description of the doctor’s visit via Twitter.

“Saw my Dr who had to push my intestines back thru the tear in my abdomen. Kinda romantic,” The Rock tweeted on Sunday, adding, “Surgery is next week. ?#BringItOn”

We hope you weren’t eating when you read that.

This might explain why the 40-year-old actor was missing at the Hollywood premiere of his newest film, Pain and Gain, co-starring Mark Wahlberg.

The cause of the injury remains a mystery, but Johnson’s return to the ring at WrestleMania 29 might have had something to do with it. But that’s just our theory.

We wish him a speedy recovery. Opinions?