We’re absolutely jealous. Brad Pitt made a surprise visit to the CinemaCon in Las Vegas for some promo work for his new zombie movie, World War Z. 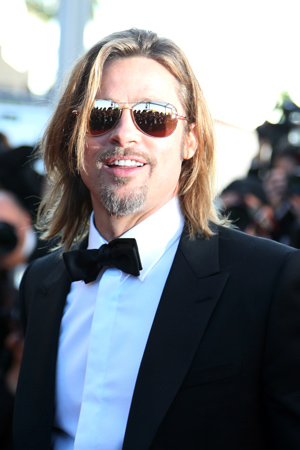 Now that’s a surprise no one would ever oppose.

The wonderful Mr. Brad Pitt made an unannounced appearance at the CinemaCon annual convention in Las Vegas to pump up his upcoming zombie flick, World War Z.

“Listen, five years ago, I knew absolutely nothing about a zombie. Today I consider myself an expert,” the actor told the crowd at Caesars Palace on Monday. “This whole thing started because I just wanted to do a film that my boys could see before they turned 18 — one that they would like, anyways. And they love a zombie.”

Pitt and Angelina Jolie have six children, including three sons. As any caring father would, the actor chose to make an apocalyptic zombie epidemic horror film.

“So, we settled on this book, Max Brooks’ book, called World War Z,” he continued. “We were faced with two Herculean challenges: How do we keep the global, spectacular, dynamic scope of the book, and how do we originate a genre that’s been done quite often and really, really well? What you’re about to see is our answer to those two questions.”

The film is set to open in theatres on June 21. So if zombie movies are your thing or if you have monster-loving sons, go ahead and check it out.

Opinions? Will you be hitting the cinemas for this apocalyptic flick?

Brad Pitt will present at MTV Movie Awards
Brad Pitt likes to live on the edge!
Brad Pitt’s getting in touch with his feminine side