There is no stopping Psy at the moment! His new single “Gentleman” has racked up a whopping number of views on YouTube and has rocketed up the charts all over the world. So much for being a one-hit wonder… 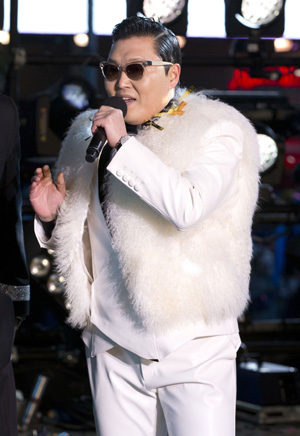 The follow-up song to “Gangnam Style” hit the ground running, with 6.9 million views in the first 13 hours after being uploaded, and it shows no sign of slowing down.

At the time of publishing this article, “Gentleman” has been viewed 94.7 million times, although that figure is climbing by the second.

The song was ranked in the top 10 songs on iTunes stores in a number of countries by Monday night, including Canada, France, New Zealand, Denmark and Sweden.

With a stomping dance beat and catchy chorus, the new song and the accompanying film clip aren’t too far removed from “Gangnam Style,” with Psy’s unique and slightly camp style all over it, but the Korean singer revealed that he felt the pressure to create something incredible following his first hit song.

“There were a lot of people who liked the song and people who didn’t. However, it was the best I could do. Even though there are a lot of mixed feelings about the song, I’ve been receiving a lot of good feedback so far, so I am happy,” he explained of producing the new track.

“A Korean singer has never been on the news for preparing their comeback. I am constantly grateful and honoured for all of this undeserving attention. Naturally, I began to feel the pressure and my music started to get tense. Whenever I was overwhelmed, I tried to find the closest thing that was close to the real me.”

He also revealed that he had the choice of two songs to release as the highly anticipated follow-up but decided on “Gentleman” — oddly because it was the “cheaper feeling” track.

“The other song was something that would have gotten attention from the world,” Psy admits. “I was thinking about going with it, but then I decided to go with the cheaper feeling song instead.”