More to adore! Angelina Jolie attended the G8 summit in London to address the issue of sexual violence and to call for action as well as funding. 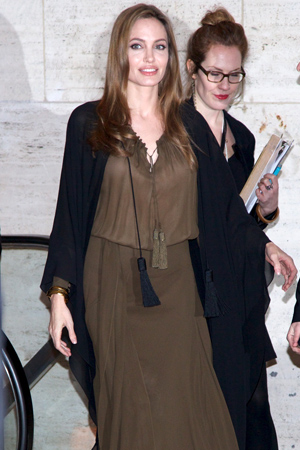 Angelina Jolie continues to inspire us with her devotion to equality and kindness.

The actress spoke at the G8 foreign ministers meeting in London on Thursday against wartime sexual violence.

“Hundreds of thousands of women and children have been sexually assaulted in the wars of our generation,” Jolie told the attendees. “But wartime rape is not inevitable. This violence can be prevented, and it must be confronted.”

British Foreign Secretary William Hague announced that the G8 nations will provide a further $36 million toward the prevention of sexual violence.

“It is encouraging to see men in leadership positions speaking out against rape. Rape is not a women’s issue or a humanitarian issue. It is a global issue,” the 37-year-old actress stated.

See how much George Lucas donated to his causes >>

Jolie is currently an envoy for the U.N. High Commissioner for Refugees. We think the actress is an extraordinary woman and an unstoppable force of good will. We’re excited to see what she will accomplish next! What do you think?