Yes! The more, the merrier, as they say. Brad Pitt is scheduled to present the Movie of the Year popcorn statuette at the MTV Movie Awards this Sunday. 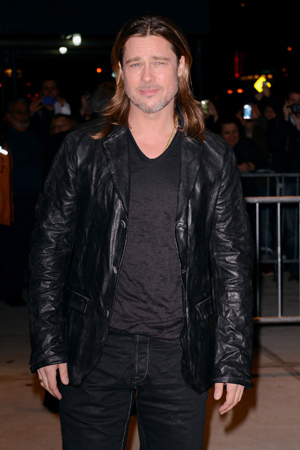 Chances are, unless you’re a teenager, tuning in to the MTV Movie Awards was not part of your itinerary this weekend. But now it should be.

If teenybopper heartthrobs are not your cup of tea, may we interest you in some Brad Pitt? Yes, the 49-year-old Adonis reincarnation will be on hand at the ceremony to present the Movie of the Year award. Now that deserves a standing ovation.

The nominees for the award include Silver Linings Playbook, Django Unchained, The Avengers, Ted and The Dark Knight Rises. Not too shabby a selection.

This year’s show will be hosted by Rebel Wilson and will air this Sunday on MTV.

So what say you? Will you be watching the MTV Movie Awards this year?

Brad Pitt likes to live on the edge!
Brad Pitt’s getting in touch with his feminine side
Jennifer Aniston wants Brad Pitt to be happy