We’ve missed this gal. Hilary Duff is making her way back to the world of television. The actress will appear on Two and a Half Men as Walden’s romantic interest. 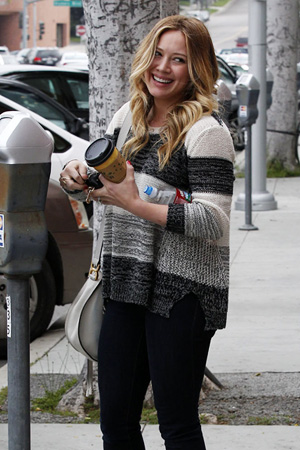 Hilary Duff returneth to the television box as Ashton Kutcher‘s romantic interest on the CBS comedy Two and a Half Men.

Read about Kutcher’s casting on the show >>

The actress will be appearing in the season finale as Stacey, Walden’s (Kutcher) lady of fancy. But lo and behold, things go topsy-turvy, and the show’s playboy falls for Stacey’s grandmother (played by Marilu Henner) instead. Weirdly enticing, no?

Duff has been busy being an adorable mum and showing off her son, Luca. If your memory is a little hazy, the actress has been married to Mike Comrie since 2010.

Check out Angus T. Jones’ rant about Two and a Half Men >>

The 25-year-old Duff is set to also guest star in Raising Hope.

We can’t wait to watch her on the show; we love us some Lizzie McGuire. Opinions?