The problem with cut-off ears is that they never come with a gift receipt… We kid. Jared Leto revealed that a fan once sent him a cut-off human ear along with a mysterious note. 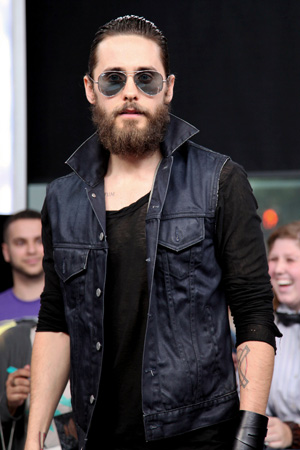 OK, this is Kathy-Bates-in-Misery kind of creepy…

As most of you know, actor Jared Leto moonlights as a singer in rock band 30 Seconds to Mars, and naturally he receives a lot of fan mail. Well, one of his fans sent him a gift that might have been a little too personal.

“The fans are an incredibly committed and passionate group of people. Going to a show is kind of like visiting Japan; you expect gifts on your arrival. You get all kinds of wonderful things,” the star told XFM radio station.

“Someone cut their ear off once and sent it to me,” Leto continued. “That was very strange. A whole ear. The Van Gogh move.”

Check out Jared Leto without eyebrows >>

Is anyone else creeped out by how nonchalant Leto is being about this? We would have been in fetal position, weeping into a childhood blanket, if we ever received a severed ear. But that’s not all; the ear also came with a clever note.

The singer told the station, “The note just said, ‘Are you listening?’ I never knew who it was, who’s missing their ear out there.”

Was there an investigation? Why is he so calm about this? This fan sounds like a potential serial killer waiting to stuff somebody in a freezer… Or someone very generous, eager to dispatch his or her own body parts to loved ones. No, that makes no sense — the serial killer scenario is more viable.

What do you think about this situation? It’s crazy, no?