Rihanna has been granted a three-year restraining order against an intruder who broke into her neighbour’s home and slept in the bed he believed belonged to the singer. 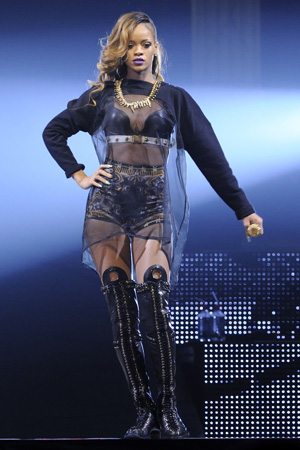 Rihanna has been granted a three-year restraining order against an alleged stalker by a California judge. Safety first!

During these three years, Steveland Barrow must keep 100 yards away from the singer, her home and her workplace. The 31-year-old broke into a neighbour’s home, which he believed belonged to Rihanna, slept in the bed he thought was the singer’s and had several pieces of poetry on him dedicated to the star. Naturally Ri-Ri acted swiftly and took out a restraining order against the intruder.

“His conduct proves he will go to great lengths to come into contact with Ms. Fenty and has no regard for her privacy,” read Rihanna’s (real name Robyn Rihanna Fenty) court petition.

We’re glad everything turned out well and no one was hurt. Are we the only ones curious about the poetry? We’d love to give it a glance. Opinions?