It’s just not his year… After being treated for a bleeding ulcer not even two months ago, Morrissey is in the hospital yet again for double pneumonia. 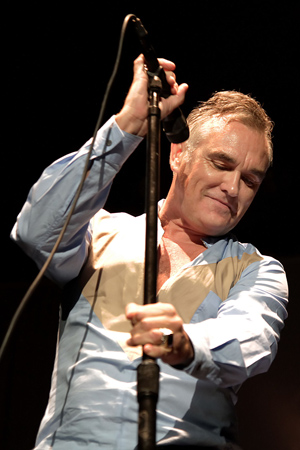 Ay! Morrissey has found himself in the hospital again, less than two months after cancelling shows because of a bleeding ulcer.

This time the 53-year-old singer is being treated in a San Francisco hospital for pneumonia in both lungs.

Morrissey was scheduled to perform at the Regency Ballroom this weekend in San Francisco but moved the show to May 1. His fan site True to You posted a statement saying the singer will be well again for Mexico’s Vive Latino Festival on March 14. No official confirmation has been made thus far.

Morrissey has been making headlines of late, and not all due to his health problems. The singer put on the first-ever vegetarian concert in Los Angeles, criticized Beyoncé for her handbag choices and even blasted the Queen of England for wearing fur. He’s really keeping busy and making friends along the way, no?

We hope his health woes will come to an end soon and he can criticize everyone again.