Selena Gomez and Vanessa Hudgens sat down with The New York Times to talk about Spring Breakers and escaping the Disney box they were trapped inside. 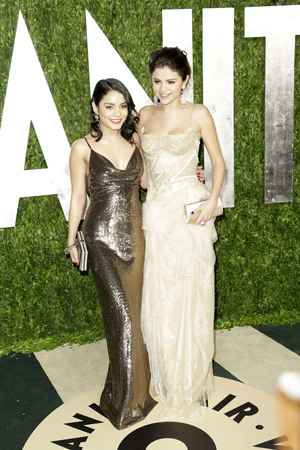 The actresses sat down with The New York Times to discuss their transitions to edgier roles with Spring Breakers, co-starring James Franco, Ashley Benson and Rachel Korine.

“Disney is a machine, and I’m grateful for it, but I feel like being part of that environment made me crave the reaction from other projects even more. Creatively this is where I wanted to go,” Gomez stated. Hudgens added, “I want people to look at me not as that girl from High School Musical but as an actress they admire. With Spring Breakers, I’m looking for a reaction, for sure. I want to shock people.”

“It’s as far as I could go at this point in my life and career,” the 20-year-old actress stated, referring to her fans. “It’s me kind of taking baby steps. But I know that people will judge my involvement in the movie as a whole. I’m prepared to accept that.”

Well, if you want to shatter the innocent image Disney creates, nothing does it better than a sex- and drug-filled movie. Brings a tear of pride to our eyes. Opinions?