The dream of every actor… James Franco has been honoured with a star on the Hollywood Walk of Fame for his contribution to the film industry. 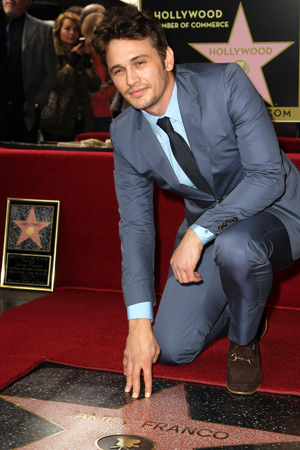 James Franco has been imbedded into the pavement… Figuratively speaking, that is.

The 34-year-old actor received a star on the Hollywood Walk of Fame yesterday in Los Angeles.

Franco’s mother, Betsy, and younger brother, Dave, attended the ceremony. The actor was introduced by Oz The Great and Powerful director Sam Raimi, and was also supported by his Pineapple Express co-star, Seth Rogen.

“I wish that I could put a bunch of names on this star, because this is a collaborative business… The people behind the scenes, the people who have been there for me, all the way through… If I could, I’d put all your names on there. Thank you, and I’ll always remember this,” an emotional Franco told the crowd.

The actor gained recognition on the television show Freaks and Geeks and has since starred in James Dean, Spider-Man, Pineapple Express, Milk and 127 Hours, for which he received an Academy Award nomination.

We congratulate Mr. Franco for this well-deserved accolade. Opinions?