Per Lindsay Lohan’s lawyer, Mark Heller, the actress has been the recipient of an epiphany and is working hard to turn her life around — again. 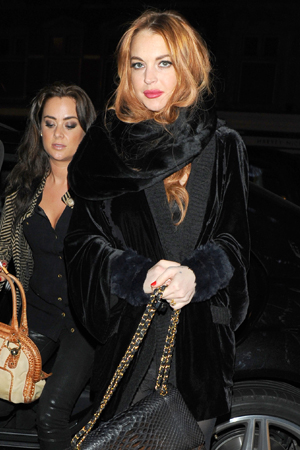 This lawyer is sure painting a beautiful picture of Lindsay Lohan… Let’s hope it matches reality.

The actress’s attorney, Mark Heller, claims Lohan is on the right track to amending her life and will be appearing in court on Friday for her probation-violation case.

“At this point, we do believe she will be in court with me,” Mr. Heller stated.

Lohan’s attorney filed a motion last Friday, requesting the court case be put on the “slow track,” thereby permitting the actress to get involved in beneficial activities like therapy and charity. According to Heller, Lindsay has had a life-altering revelation and wants to change her troublesome ways.

“This has happened to Lindsay. Considering all that this girl has been through … It has really traumatized her,” he stated. “When she was handcuffed and put into detention centre with murderers and hardened criminals, it for sure had a great impact on her. And then being re-arrested and facing going back to jail caused her to have an epiphany. Sometimes the cumulative effect of everything in your life percolates, and you have a realization and a clarity that things have to change.”

And apparently Lindsay had one of those “epiphany” things. Granted, it won’t help her much in court, but the judicial system is trying to accommodate the actress as much as possible.

“They have to determine how they feel justice will best be served,” Heller said. “Lindsay no longer resides in California. She resides full time in New York. They are reconsidering everything. When we meet on Friday, they will have assessed their thinking. Hopefully when we come together on Friday we will have some appropriate resolution.”

What do you think? Are we going to see a transformation in Lohan, or not so much?