At least it’s a healthier choice… Sean Combs and Mark Wahlberg have announced that they are the new faces of AQUAhydrate brand water. 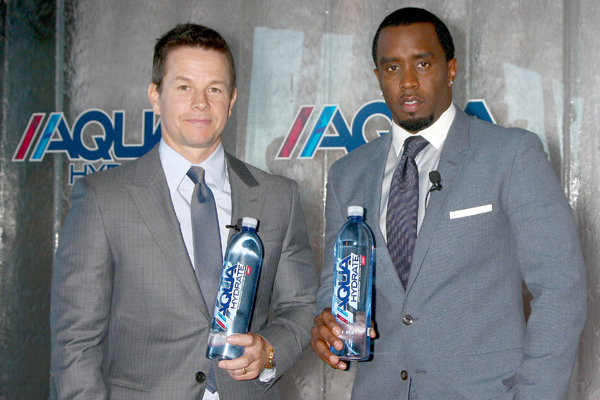 Why, this is the purest endorsement of all… Celebrities for H2O!

Sean “Diddy” Combs and his buddy-pal Mark Wahlberg announced yesterday at a press conference in Beverly Hills, California, that they are the new faces of AQUAhydrate water.

What is AQUAhydrate water? Well, it’s a beverage brand that has wedged itself into an emerging niche of products designed to target the ultra-health-conscious, who want everything to be infused with something rare and probably unnecessary. Clearly plain water is just not good enough anymore. AQUAhydrate uses highly advanced filters to ensure optimal cleanliness of its water, then permeates the beverage with about 72 different minerals and electrolytes, then “supercharges” the water with electric currents to elevate it to an alkaline pH of 9. It’s supposed to do wonders for your body and mind.

“I was at a party last night till 4 a.m., and look how fresh and hydrated I am today,” Diddy said. “For the brothers out there, ashiness is something that is running rampant through our communities, and this right here keeps me with my glow.”

Ironically enough, Combs also happens to be the face of Cîroc vodka, which is really like alcohol-free water, if you think about it. But fear not, Diddy is actually making an effort to turn to a healthier lifestyle.

“You might ask why we would get into something like water, something that has already been done before,” the star said. “I grew up in Harlem, and the favourite beverage of Harlem was Kool-Aid. All flavours. Made with half a pound of sugar. And throughout the years, that was my beverage of choice. I never drank water. That’s why I have so much flavour. I was a Kool-Aid kid.”

“There comes a point in your life when you decide to have more balance,” he continued. “Me, as an extremist, that happened two years ago. And this is a part of my overall transformation — mentally and physically. Caring about what you put in your body and balancing things out.”

Diddy also confessed that there is something else keeping him balanced, and it’s none other than Mr. Wahlberg.

“Chemistry is everything in a relationship. And this man inspires me to be a better person. He’s truly evolved, and I’m going through my evolution right now. When I’m waking up, he’s at church, and he’s praying for me. And that’s not a joke. He’s really committed to his faith and his family and to his craft and his profession. He’s somebody that I can honestly say that I look up to.”

See? It’s not just an endorsement for electrolyte water; it’s an embodiment of Diddy and Mark’s friendship. So, any of you enticed by this product and want to give it a whirl? It’s only $30 a case…

Rihanna gets restraining order against intruder
Michelle Williams and Jason Segel break up!
2013 Oscars: The best and worst dressed