Who in Hollywood hasn’t had their phone hacked? Vanessa Hudgens reveals to Paper magazine what life was like post-naked photo scandal and talks about edgier roles. 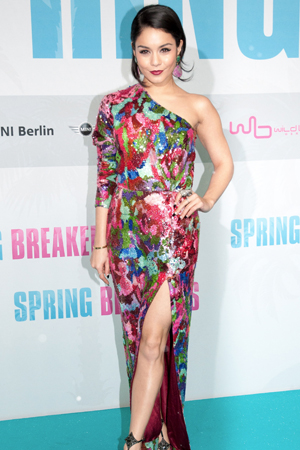 Ah well, this gal is not one to hold on to past mistakes.

We all remember the infamous 2007 nekkid photo scandal that claimed the image of Vanessa Hudgens’ innocence when her private photos found their way to the internet.

“That was just a really s**tty situation that sucked,” the actress told Paper magazine. “That was by far the worst moment of my career.”

Then again, the little photo mishap completely rewrote Hudgens as an actress, opening doors to the more risqué roles out there, like her most recent venture in Spring Breakers, co-starring Selena Gomez, Ashley Benson, Rachel Korine and James Franco.

“It’s always been hard for actors to cross that bridge, but honestly, you have to hold out and do what you think is right for yourself,” she continued.

As long as she’s happy! What are we thinking about all this?