It’s probably not the best show of love, but a fan threw an energy drink bottle at Rihanna as she was exiting a nightclub in London. 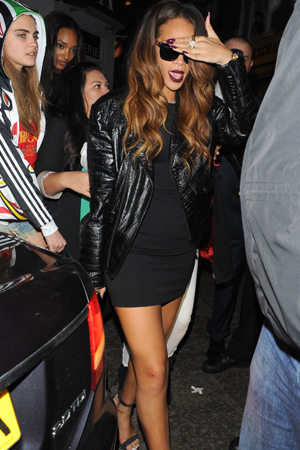 Can’t a girl party anymore without having things thrown at her?

Rihanna was attacked outside The Box nightclub in London yesterday morning, when an overzealous fan threw an energy drink bottle at her. Not the best way to get the attention of your favourite star, but OK…

Learn what to eat for energy >>

Per The Daily Mail, this “crazed fan” shouted at RiRi about Chris Brown before propelling a bottle of Lucozade at the singer. Rihanna endured a tiny scratch on her knee, and her bodyguard sustained minor injuries.

Last week the 24-year-old singer attended the Grammys with Brown, looking all kinds of reunited, confirming those longstanding rumours, nearly four years since he attacked her in 2009. The attacker fan must have not been happy about the news…

Check out natural ways to cure a hangover >>

Well, whether we like it or not, Rihanna and Chris Brown are back on. Let’s not throw things at them for it, though, OK? We can just make mean signs and posters.