He must really love kids now! Hugh Grant has declared the birth of his second child, a son, with girlfriend Tinglan Hong. 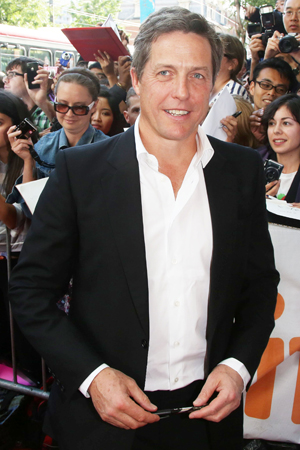 Hugh Grant is a papa yet again. The actor and his girlfriend, Tinglan Hong, have welcomed their second child together!

“In answer to some journos. Am thrilled my daughter now has a brother. Adore them both to an uncool degree. They have a fab mum,” Grant tweeted. “And to be crystal clear. I am the Daddy.”

The two welcomed their daughter back in September 2011, although the actor described their relationship as a “fleeting affair” at the time. They have obviously reunited… Grant has also greatly altered his views on parenthood and made a wee revelation.

“Everyone was right all these years, saying, ‘Hugh, why don’t you have some children? It changes your life,'” Grant told Ellen DeGeneres. “Now that I have a child, it is life changing. I recommend it. Get some!”

Well, congrats to the happy parents!