This case is moving along quickly! Paralympic champ Oscar Pistorius was officially charged with the murder of his girlfriend in a court hearing yesterday. 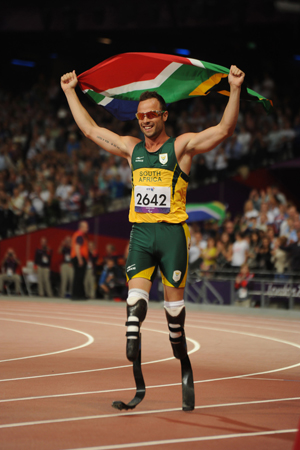 So it hath begun.

The Paralympic athlete nicknamed “Blade Runner,” Oscar Pistorius, appeared in court yesterday to be officially charged with the murder of his girlfriend, Reeva Steenkamp.

The 26-year-old sprinter allegedly burst into tears and buried his face in his hands while the charge was being read.

If you’re not aware, Pistorius is accused of murdering his 30-year-old model girlfriend in his Pretoria home. Steenkamp was shot four times, although Pistorius claims he mistook her for a home intruder.

The South African athlete is in custody at a police station. His bail hearing will be set for Tuesday or Wednesday next week.

Check out an interview with Paralympian Josh Cassidy >>

To be continued as this story unravels. Opinions? Thoughts?