It sucks not being nominated when you’re one of the biggest stars in the world, but Justin Bieber is a professional. He tried having a livestream at the same time as the Grammys. 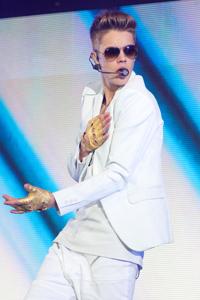 Aww, Grammy night was not the best for Justin Bieber!

The 18-year-old singer “just happened” to schedule a livestream for his fans to share some music on the same night and at the same time as the music awards show. This probably had nothing to do with the fact he was snubbed by the Grammys. Absolutely nothing.

Check out the winners of the 2013 Grammy Awards >>

Alas, it did not go according to plan, and Justin was not a happy camper.

“livestream is over capacity it not letting me in the room give me a second lol…alright so livestream isnt working.. soo im gonna figure something out,” he tweeted yet again.

And again, “Since nothing is working and im super upset i feel i gotta make it up to u. i should post a new song on twitter so you can still be excited.”

Then the livestream worked for a little and failed again. Defeated, Bieber decided to post an unfinished song as a treat for his loyal fans, saying, “its not finished but heres a little part a song I’m working on.”

Sadly, that song is no longer available either. All for naught for Mr. Bieber. Maybe next year will be kinder to the singer. What do you think?