He just can’t catch a break… Chris Brown shall remain on probation while the court waits for supplementary evidence of his community labour hours completion. 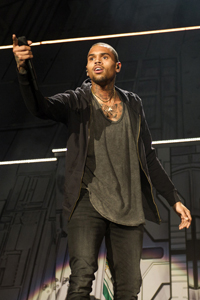 Chris Brown was soaring high, had the taste of freedom in his mouth… Then bam! His probation continues.

The hopeful singer attended his hearing at the Los Angeles Superior Court yesterday — with Rihanna present for emotional support — but alas, the presiding judge prolonged his probation until supplemental evidence is provided to prove or disprove Brown’s community service completion.

The prosecution is alleging that the 23-year-old star might not have completed his 180 hours of court-ordered community labour, following the 2009 Rihanna assault. The allegation arose after L.A. Deputy District Attorney Mary Murray inquired into the credibility of the reported hours at the place of Brown’s service.

“This inquiry provided no credible, competent or verifiable evidence that defendant Brown performed his community labor as presented to this court,” she stated in the filed report.

Judge James Brandlin set a probation violation hearing for April 5, and Brown must contact his probation officer within the next 48 hours.

Can we all take a moment and recognize the twist in this story? Rihanna attended to support Chris Brown in a hearing about the probation that resulted from her assault… What?

We shall see how this cookie crumbles. What do you guys think?