This is completely nonsensical, but let’s do it! Donald Trump is suing Bill Maher for the sum of $5 million, after the TV host did not honour a wager documented in writing. 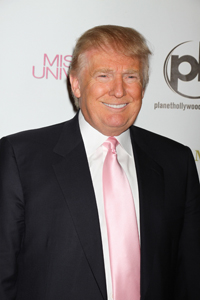 This officially calls for the face-palm manoeuvre.

Donald Trump is suing television host Bill Maher for $5 million, after the latter refused to cough up the money at stake following a documented wager. Confused? Let’s walk through this together.

So, the duo had it in writing that if Trump produces a birth certificate that proves he is not a product of his mother having sex with an orangutan, Maher will write him a cheque for $5 million. This all came about after Trump made a similar challenge to Barack Obama on Jay Leno’s show.

But when Trump did present the necessary evidence — in other words, his birth certificate, verifying that his father is actually human — Maher refused to keep his end of the bargain!

Naturally Mr. Trump filed a lawsuit with the lovely folks at the Los Angeles County Superior Court yesterday, demanding the wager be honoured.

This is the weirdest lawsuit of the year thus far. Maher is probably in the wrong, here, though it’s hard to tell — logic is not present in any of this.