Take a look at Tim McGraw! The country singer visited the Ellen show to talk about getting sober and his motivation for it. Oh, and he also came commando! 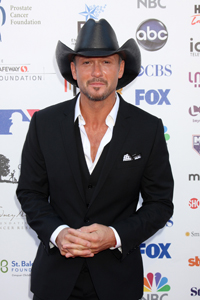 After revealing his struggle with alcohol and eventual journey to sobriety to People magazine back in January, Tim McGraw had no problem getting candid about it on the The Ellen DeGeneres Show.

Read more on alcoholism and if you’re at risk >>

He chose to get incredibly fit instead. And oh boy, has he been successful! The man has the body of a fantasy… Did we mention McGraw is 45 years old? That’s right.

But to become super hot wasn’t the only reason the singer quit drinking; family well-being was at stake!

“I also thought that, my girls are getting older,” he continued, “and I certainly wanted to have some good, solid ground to stand on when I started talking to them about their situations.”

In case you’ve forgotten, McGraw is married to the beautiful Faith Hill, and they have three daughters together: Grace Katherine, 15; Maggie Elizabeth, 14; and Audrey Caroline, 11.

Oh, that’s right. We almost forgot! McGraw was not wearing any underwear on Ellen and kindly shared that information with all of us. Settle down, ladies!

“These pants were too tight to put underwear on,” the singer said with a laugh.

Is everyone’s imagination running wild right now? He was then rewarded with an entire basket of Ellen underwear. We suppose this will end his commando moments.

Well, we are certainly proud of Mr. McGraw and glad he’s making the world a more gorgeous place. His new album, Two Lanes of Freedom, came out today, so grab a copy!

40 mins ago
by Alyssa K. Davis