Making music is what she does best! Britney Spears is back in the studio, following a day of errand running and shopping. 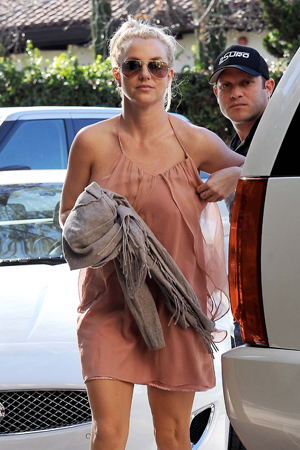 Former X Factor judge and pop icon Britney Spears not only managed to run errands solo but also dropped by the studio for some music making. What a gal!

The star stopped by the drugstore to pick up a few things, wearing some sweats, a hoodie and UGGs, because… she’s Britney Spears. She then changed into jean shorts and a baggy shirt to hit up Target. Finally, after that, she drove down to the studio for some long overdue recording.

Read up about Taylor Swift’s return to the studio >>

“I’m at the studio recording a new song for my boys. They are going to freak out when they hear it. So excited!” the singer tweeted. “It’s a surprise so keep it shhhhh and don’t be grouchy. I’ll fill you all in soon ;)”

Spears left The X Factor after apparently realizing that she is yearning to be back onstage. No new album release information has been revealed. For now, though, you can enjoy BitBit’s newest song with will.i.am, “Scream & Shout.”

Are you excited to hear new music from Britney?