After being married a little over six months, Alec Baldwin and wife Hilaria are reportedly expecting their first child together! 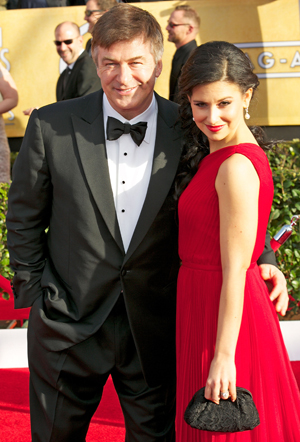 We hope he still remembers how to change diapers!

According to recent reports, Alec Baldwin and wife Hilaria are expecting their first child together!

“Hilaria has told only really close friends and family she is pregnant, only a close circle she trusts,” a source told In Touch magazine.

Check out these baby names >>

The rumour has not been confirmed yet, and Baldwin’s rep is not making the speculation any easier, tweeting:

“Our response to baby speculation over the past 18 months has remained the same – when/if @abfalecbaldwin and @Hilariabaldwin have news they want to share, they will share it,” the rep stated. “Until then, we have no comment.”

What does that even mean? Just say “yes” or “no.” Come on! Either way, if Hilaria is pregnant, the baby bump will be tough to hide. So we should have our answer within the next few months.

Read more on preparing for baby >>

The 54-year-old actor already has a daughter, Ireland, from his marriage to Kim Basinger. Baldwin and Hilaria have been married since June 2012. Hey, if it’s another girl, they can name her America…