As if we weren’t jealous enough of Miley Cyrus… The singer-actress talks about her upcoming record and being engaged to the hunky Liam Hemsworth. 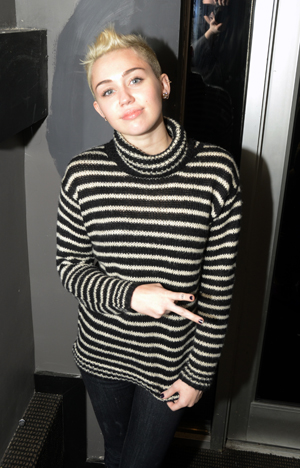 Have you seen Miley Cyrus on the new Cosmopolitan cover? Go check it out. This gal is smokin’!

The actress-singer graced the cover of the magazine, wearing a white blazer and trousers with nothing underneath. True Cyrus fashion! She dished about her relationship with fiancé Liam Hemsworth and her new record.

Upon being asked which aspect of her life is most satisfying, Miles knew exactly what to say.

“Number one is my relationship with Liam,” the singer stated. “That’s what I feel the most confident in because you never know. There’s so much hype behind my new record, but it could come out and, worst-case scenario, everyone f*cking hates it.”

We don’t think that’s even possible! But Cyrus is really changing things up on her upcoming album, since she has no movie or show to promote anymore.

“I’ve never gotten to make a record like this because Disney’s always been on my back saying, ‘You’ve got to promote the TV show in two months, so make sure your record’s done…and when you promote your record, can you promote the show, the movie and the Hannah Montana record?’ I was basically carrying two people’s careers and trying to make mine the priority. Now, it’s almost like being a new artist and trying to make a first impression. I think the best thing I could have done was take those two years off to really live, because now people don’t think of me as who I was on the TV show.”

Read how Adele’s song woke a girl from a coma >>

So, let’s get this straight. Cyrus is young, successful, making a record of her dreams and is engaged to Liam Hemsworth? Lucky girl. The star herself admits that her husband-to-be is really turning up the heat in her life…

“I’ll literally look at him and be like ‘You are hot, dear god!’,” the “Can’t Be Tamed” Cyrus stated. “The other day, I turned on the pool heater and it was steaming, and he walked outside and took off his clothes and jumped in the pool. I was like, ‘I’m gonna faint—the hottest guy of my life is in a steaming pool. This looks like a Playgirl shoot.'”

Life must be so rough for you, Miley. We’re really happy for Cyrus and can’t wait for the release of this album!