Ben Affleck might have conquered Hollywood, but he doesn’t want his kids there. The actor spoke out about discouraging his children from pursuing a career in the entertainment world. 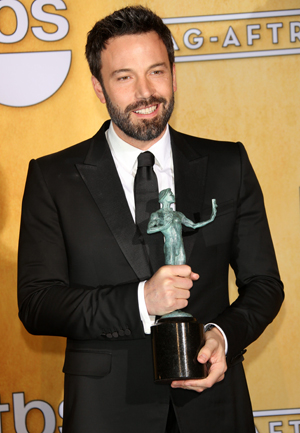 You’d think being a product of the industry, this guy would be more encouraging…

The beautiful and talented Ben Affleck will not be pushing his kiddies into the Hollywood business. He’ll do quite the opposite, actually!

“I would do whatever I could to discourage that,” the actor and director told E! News at the Producers Guild of America Awards. “My kids have enough issues of being exposed in ways that I don’t want them to be exposed, in magazines and shows and stuff.”

Let’s be honest; he’s got a point. When his kids reach their teens, Affleck will be raking up a hefty therapy bill. What with the paparazzi documenting every move the little ones make, it must be traumatic. Maybe shoving them into an even more toxic environment, like entertainment, is not the best move.

But if they are interested in acting, Affleck already has a plan for that!

“You know, if you’re interested in drama, there’s great theatre classes and stuff, and that’s what’s appropriate,” he stated.

Take a look at these kids’ royalty-inspired toys >>

Affleck has been married to Jennifer Garner since 2005, and the couple has three kids: 7-year-old Violet, 4-year-old Seraphina and almost 1-year-old Samuel.

We’re glad to hear Ben and Jen are sane people who don’t want to push their children into the business. Way to go! Opinions?

Ben Affleck drops out of Focus
Ben Affleck for senator? Not yet
Kristen Stewart to co-star with Ben Affleck in a comedy