Michael Bublé and his beautiful wife, Luisana Lopilato, are expecting their first baby together. The couple made the announcement through a video message. 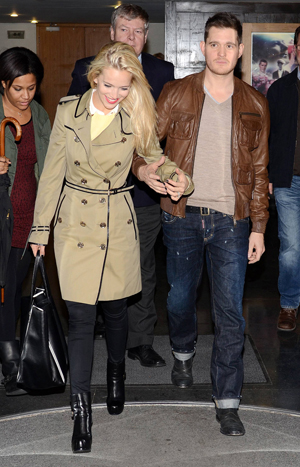 Canuck singer Michael Bublé and his wife, Luisana Lopilato, are expecting their first child together! We can already imagine the songs on his next album…

See what you need to know about prenatal ultrasounds >>

The couple posted the announcement as a YouTube video, which starts off with, “Mike, Lu… and mini Bublé!!!”

The video then zooms into a sonogram and then a photo of the two happy parents-to-be, with cheers in the background and then a final caption, “We’re having a baby Bublé!!!”

Learn what to bring to the hospital for a newborn >>

Bublé and Lopilato got engaged in 2009 and were married in Argentina in 2011. The singer previously dated Emily Blunt, but they ended their relationship 2008.

We are incredibly excited! This baby will hopefully inherit his or her father’s vocal abilities! What do you guys think? Excited?