The news has been quite dull while this guy was gone. Luckily Prince Harry touched down in Britain yesterday and is ready to get back to his domestic royal duties. 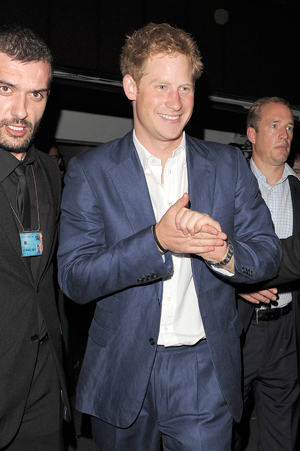 After his deployment in Afghanistan, the gorgeous piece of royalty known as Prince Harry has arrived back on home turf in Britain. The isle has just gotten a little more beautiful…

The royal was deployed for four months and landed at the RAF Brize Norton air base yesterday. We’re sure Prince William and Kate Middleton have covered him in kisses and hugs already!

Read more on the royal family >>

“I’m longing to see my brother and sister-in-law, as with any of the soldiers who’ve just come off the plane after four and a half months away,” the prince told the press.

Adding, “I really am longing to catch up with people behind closed doors — you guys aren’t invited.”

Now that Harry is back in the U.K., what’s the plan? Relaxing? Partying (hopefully dressed)? No such luck; the prince has many duties to attend to.

“The Army will have an idea, I presume, and what that is, I will do,” he stated.

“Given the opportunity, I’d like to take on more royal stuff, to the extent that, pre-deployment, I’ve been very busy — hopefully there’ll be a few gaps that open up.”

Good man! While Harry is still in Britain, ladies better book those flight tickets! What do you think Harry should focus on during his time off military service?

Photo courtesy of Will Alexander / WENN.com