After recently accepting a Golden Globe for Best Song, Adele has agreed to perform “Skyfall” at this year’s Academy Awards. 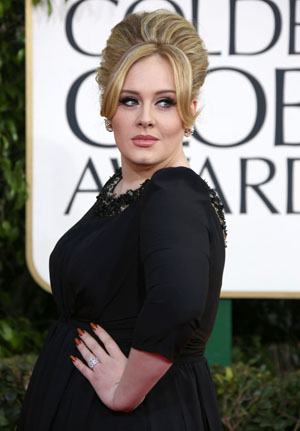 Epic music, please! The wonderful and talented Adele will be performing her Oscar-nominated song “Skyfall” at the 85th Academy Awards, the ceremony’s producers have confirmed.

The 24-year-old songstress has already picked up a Golden Globe for the song, which is not too shabby, yes? This will be the first time “Skyfall” will be performed live and Adele’s first U.S. television performance since last year’s Grammys (remember that? It was amazing!).

“We have enormous respect for Adele’s unique artistry as a songwriter and a singer,” stated Craig Zadan and Neil Meron, the producers of this year’s Academy Awards. “She is currently one of the most successful recording artists in the world, and we believe that her performance of ‘Skyfall’ will be an exciting Oscar moment for audiences watching at the Dolby Theatre and on television screens around the world.”

Read up on how Adele adopted a new, healthy lifestyle >>

The singer has been occupied with her and boyfriend Simon Konecki’s little baby boy, whom she delivered back in October. Luckily she’s found time to bless us with an appearance at the Oscars.

Are you excited? We are. Opinions?

14 hrs ago
by Araceli Cruz