It turns out Beyoncé’s moving rendition of the American national anthem was pre-recorded and put in at the last minute for reasons unknown. 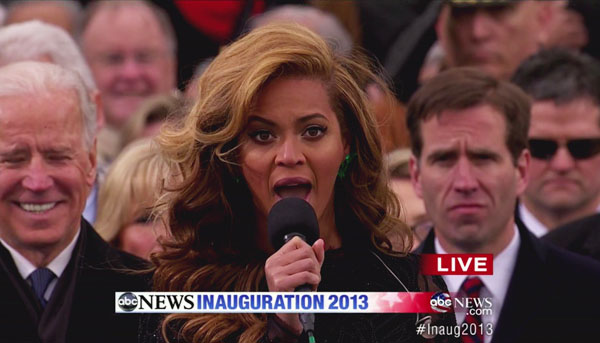 Oppa! It’s been awhile since we’ve had a lip-synching incident!

Yes, that’s right. Bey-Bey pulled an Ashlee Simpson. We kid; Beyoncé was much more graceful. According to the spokeswoman for the Marine Corps Band, Kristin DuBois, it is standard procedure to record a backing track in case of a mishap during the performance, but it was a last-minute decision to use it wholly.

“All music is pre-recorded for the ceremony because there are so many eventualities and conditions that day,” DuBois told the National Post. “We performed live, the band, but we received last-minute word that Beyoncé was going to use the pre-recorded vocal track. Those were the instructions we were given. We don’t know the reason why.”

Of course, now everybody is on Bey-Bey’s case because she “faked” her way through the performance. It would explain why she took out her earpiece halfway through the song — but would not explain why everyone is going crazy over it.

Beyoncé’s singing prowess is not to be doubted! If the woman wanted to give the best performance at the inauguration and no one could tell the difference until the news broke out, then pipe down! It was a moving, emotional rendition of the anthem either way.