Prince Harry is ready to step up to the plate and be an uncle. The young royal sounds off on Kate Middleton’s pregnancy and lack of privacy the media is allotting. 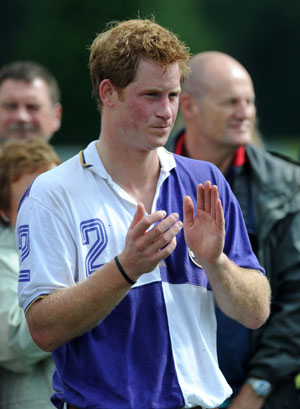 Prince Harry is all set to be an uncle, y’all!

The hunky-licious royal revealed during an interview following his four-month military tour of Afghanistan that he is excited for the soon-to-be parents, Prince William and Kate Middleton.

“Obviously I’m thrilled for both of them. It’s about time!” Harry said. “I can’t wait to be an uncle.”

Captain Wales, as he is known in the army, has been serving with the British Army Air Corps since September but has successfully managed to stay in touch with his family and the news. Harry is no stranger to the dangers of the media and asserted that it was “very unfair that [William and Kate] were forced to publicize [the pregnancy]” so early.

See when the Duchess of Cambridge is due >>

“I literally am very, very happy for them, but I just only hope that she and him — but mainly Catherine — hopefully that she gets the necessary protection to allow her as a mother-to-be to enjoy the privacy that that comes with.”

What fun would that be for us? We want to know it all! Of course, what interview would be complete without a little prying into the “naked-in-Vegas” scandal… What did Harry have to say?

“I probably let myself down. I let my family down. I let other people down,” the Prince stated. “At the end of the day, I was in a private area, and there should be a certain amount of privacy… The way I was treated by [the media] I don’t think is acceptable.”

Aw, we can’t even be mad at him, he’s so pretty! Plus, naked photos are involved — you didn’t let anyone down, Harry!

What do you guys think? How much privacy will Kate actually get?