More evidence that Barbara Walters should be carried around at all times. The television host fell and hurt her head while in Washington for the inauguration events. 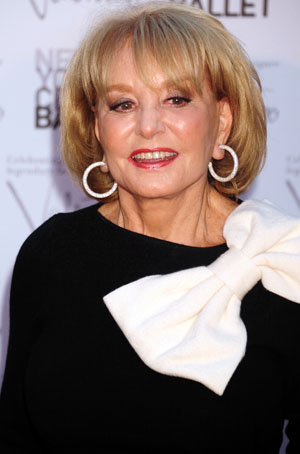 She will be OK, everybody!

The View host Barbara Walters is recovering after suffering a nasty fall and cutting her forehead during a visit to the British Ambassador’s residence in Washington, D.C., on Saturday. Ouch!

Learn the signs it’s time to see your doctor >>

“Barbara Walters fell on a stair last evening while visiting the British Ambassador’s residence, and the fall left her with a cut on her forehead,” an ABC News representative told E! News. “Out of an abundance of caution, she went to the hospital to have her cut tended to, have a full examination and remains there for observation. Barbara is alert (and telling everyone what to do), which we all take as a very positive sign.”

See if you should be exercising with pain >>

The 83-year-old Walters was in Washington to cover Barack Obama‘s inauguration extravaganza but will be resting in the coming days instead.

Rest that forehead, Barbs! We need you in a tip-top shape. Our best wishes for a speedy recovery!