The truth was bound to come out at some point. Lance Armstrong agreed to a candid interview with Oprah Winfrey, during which he admitted to using performance-enhancing drugs throughout his racing career. 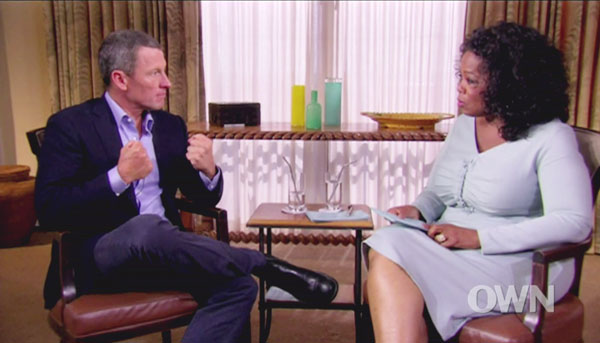 Well, then… If you’ve been defending Lance Armstrong’s honour since the doping accusations surfaced, you don’t have to anymore. The discredited cyclist has admitted to using performance-enhancing drugs.

During an interview with Oprah Winfrey on Oprah’s Next Chapter, Armstrong confessed to taking banned substances during his cycling career and even stated it would not be possible to achieve seven straight Tour de France wins otherwise.

Check out our tips for cycling safety >>

“There were cortisones, and then the EPO [erythropoietin] generation began… in the mid-’90s,” Lance told Oprah. “I viewed [the drugs] as very simple oxygen-boosting drugs that were incredibly beneficial for performance sports. And that’s all you needed. My cocktail was only EPO — not a lot — transfusions and testosterone.”

Oh well, if it was not a lot… Almost justifies building a career on lying. So why postpone telling the sweet truth for so long, Lance?

“I don’t know if I have a great answer,” the cyclist said. “I will start my answer by saying this is too late… and that’s my fault. I view this situation as one big lie that I repeated many times.”

It also helped that testing was done outside the races and that testing for EPO wasn’t conducted then, so his chances of getting caught were insignificant. He just had to be clean for the duration of the actual race.

See if biking to work might be for you >>

Armstrong stated he has not been using performance-enhancing drugs since 2005, so his 2009 Tour de France third place win was honest. At this point, though, it matters little.

“I’ll spend the rest of my life apologizing and trying to earn back trust from people,” Armstrong said.

For an athlete who’d risen to symbolize hope and perseverance, built on a foundation of earnestness, it’s difficult to recover from such a fall from grace. What do you think?

Kelly Ripa admits to getting Botox
Jessica Simpson keeps getting knocked up, can’t get married
Are Carmen Electra and Simon Cowell dating?